The ever popular apple introduces iPad few months before. All the products have their alternatives in Technology market. Apple also affected by this adulteration. Here are the 9 alternatives for Apple iPad to hit the market this year. They feature multi-touch screens that are larger than the iPad’s 9.7-inch screen. And while they might not have Apple’s buzz, they do offer capabilities not available in the current version of the iPad.

It is a netbook which working on 1.6 GHz  intel atom N450 processor, 1-2 GB ram. The keyboard is replaced by multitouch screen. Windows 7 operating system produces a wonderful multitasking. It has in built webcam 2 mega pixel which is not  in any other tablet pc or iPad. 2 USB ports, mic and head phone jacks, and VGA and Ethernet ports.It will be available with 160GB to 320GB hard drives or 16GB or 32GB SSD and optional 3G and GPS.

This astonishing display of the Notion Ink Adam Tablet PC has three functions; it can run in full color, black & white, and e-paper mode. It  use NVIDIA’s Tegra 2 (a graphics processor specifically designed for tablets and other mobile devices).  Built in 3 mega pixel camera. 16 hours battery back up. The Adam Tablet is going to be a real computer powered by a dual-core 1 Ghz Intel processor, will fully support multitasking because of the desktop-like dual core processors and gaming on it will be excellent because the Adam Tablet will be armed with the potent nVidia Tegra 2 GPU! 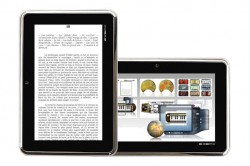 Its quite expensive. The ExoPC’s upcoming release will lack 3G, but it will still have a bigger screen and higher resolution than the iPad, and it will use Windows 7.There is a 1.6GHz Intel Atom CPU along with 2GB of RAM, while storage comes from a 32GB solid state drive and SD memory cards. 1.3-megapixel camera captures photos and videos, and there are three USB ports, a VGA output and a SIM card slot for connecting to 3G data networks. The battery is rated at four hours. A virtual keyboard, app support and e-book compatibility round out the known features of the device. 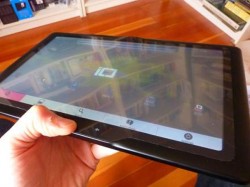 It has 1GHz Tegra 2 SOC, the 11.2-inch displaya. Headlined by a 3G connection for cellular voice calls , it also includes a user-replaceable 40Wh battery, an SD card reader, FM radio, GPS, 802.11n WiFi, Bluetooth, MicroUSB connectivity to PCs and USB peripherals, stereo speakers, and dual webcams a 2 megapixel front-facing unit and a 5 megapixel autofocusing snapper on the back. Multitouch displays will be available in both resistive and capacitive flavors, with the 1,366 x 768 resolution being filled by Google’s Android OS. 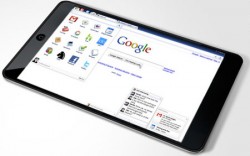 It has 1.6GHz Intel Atom processor with 1GB RAM. Multitouch screen of 12-inch, 1366×768 resolution. The graphics part contain, GPU + CPU combination, looks like an Nvidia Ion chipset. Since, the device is able to play 1080p YouTube videos smoothly, it’s supposed to have a good Nvidia acceleration for HD. 3.5mm headphone jack, a microphone jack, built-in 1.3 megapixel webcam, a charging port and a USB slot. 3G card port. A built in speaker for playback audios.The original Wi-Fi version of the JooJoo is also being offered for online pre-ordering for $499. 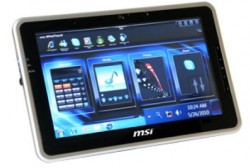 It runs Windows 7.  the hardware specs are undeniably impressive. This 10-inch tablet runs video at full 1080P HD, sports a 1.3GHz Celeron processor as well as GMA4500 graphics. The requisite capacitive touchscreen is present and a deluge of ports, including HDMI-out for home viewing, are built into the device.

The CEO of Hanvon smashed an ice sculpture of an apple at a press conference to celebrate the announcement of the BC10 — but the device’s reported price of over $600 may make doing the same to Apple’s iPad sales numbers difficult. 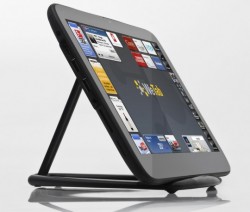