This could be the upcoming iPad Air Pro or iPad Air Plus leaked schematics, published on Japanese website Macfan. There were rumors about a 12.2 inch Apple iPad which may replace macbook air line up, and comes with dual os setup Mac OS X and iOS installed. But wait, these all rumors and nothing officially confirmed or any leaked data confirms that 12.2 inch iPad will come with dual operating system installed. 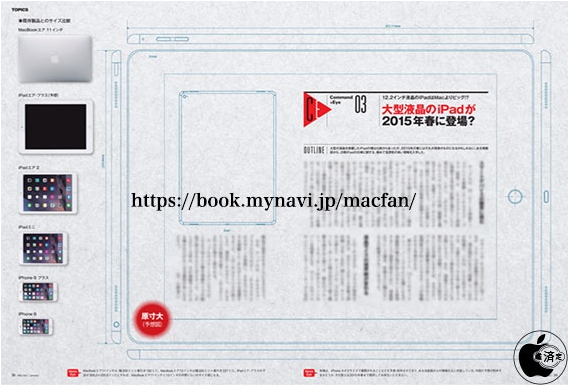 OS X has no signs of supporting touch features till date in its code. So Its just a rumor mill that claims apple may release all new iPad Pro with 12.2 inch size and so on. Lets explore what the leaked iPad Pro or iPad Plus schematics details reveal.

Apple just released its iPad Air 2 which has stunning specs but the takers are very less and iPad sales already started to decline. Its mainly because apple is innovating very less in iPad and people who have bought it already using it without any issues to their iPad and iOS. The recent release of iOS 8.1.1 focuses on improving iPad 2 and iPhone 4S which had lags and performance issues after iOS 8 installed.

After Apple iPhone got its huge stretch to 5.5 inch (iPhone 6 plus) and iPad got its shrink (iPad mini), if this rumor is true, we will be very soon seeing a more stretched iPad version with 12.2 inch screen size.

iPad Air Plus or Pro Specification

So far these are the leaked specifications about Apple iPad Pro or iPad Plus. Macfan also mentioned that the current iPad mini 3 will be discontinued and iPad mini 4 will be enter production with A8X processor present in iPad Air 2. KGI Securities analyst Ming-Chi Kuo suggests that iPad Pro will not enter mass production until second quarter of 2015 as apple is currently busy with iPhone 6 Plus production to meet the demands.

Apple is working on all possibilities to fulfill the demand for iPhone 6 Plus worldwide.

There is no exact date revealed by macfan leaked reports. But the site confirms that we can expect the product launch by April or June 2015 and apple will hold a separate launch event to introduce 12.2 inch iPad Pro to the world.

Will you choose Bigger iPad Pro?

Well, i personally feel, that there are tons of features still missing in iPad. Though the hardware is upgraded every year, apple just dont care about the iOS improvement that it should do for iPad. To make it really a productivity beast and use the hardware to its best potential, i think apple should bring some of its OS X features to iPad. Otherwise, it will look like a stretched version of iPod Touch for many. For an example, Guest Users mode will be really useful to switch between multiple user accounts in iPad. There are so many features can be added to make iPad sales sky rocket once again.

But Apple should really listen and understand what their customer truly wants. The speed of innovation and advancements is not enough and the declining sales of iPad proves that very well.

So what do you think about the iPad Pro rumor ? will you go for one? do share it with us in the comment box below. Thanks for reading and have a wonderful day!