Linux started to spread like a fire everywhere, Many use Ubuntu OS as their favorite desktop operating system. However windows users do love ubuntu and many other open source applications for certain tasks that open source alone can do. When it comes to image editing, it is considered to be a bit complicated in linux systems as far as the applications are concern. Here i have few cool applications that makes your image editing and processing pretty easier.

Krita (For Linux Only)

Krita is an Open Source Tool for Linux users used to edit bitmap images and draw images with the following advanced features:

*As part of the KOffice suite it added a full features image editing and draw application – including lots of filters for either serious use or just to play around with.

The oldest and most popular open source graphic tool for GNU Image Editing is Gimp. Gimp was started in 1995 and  it has used since today. Gimp is a valid competitor to all of the commercial bitmap drawing applications on the market.

Among its features you find:

If you are an expert in Photoshop, but need an open source alternative – Gimpshop is the way to go. Gimpshop is an excellent tool which has all the counterparts as much as in Photoshop. So photoshop users feel comfort in using Gimpshop.

*All features in Photoshop are not available in Gimpshop, since it is based on the Gimp project and it’s feature set. 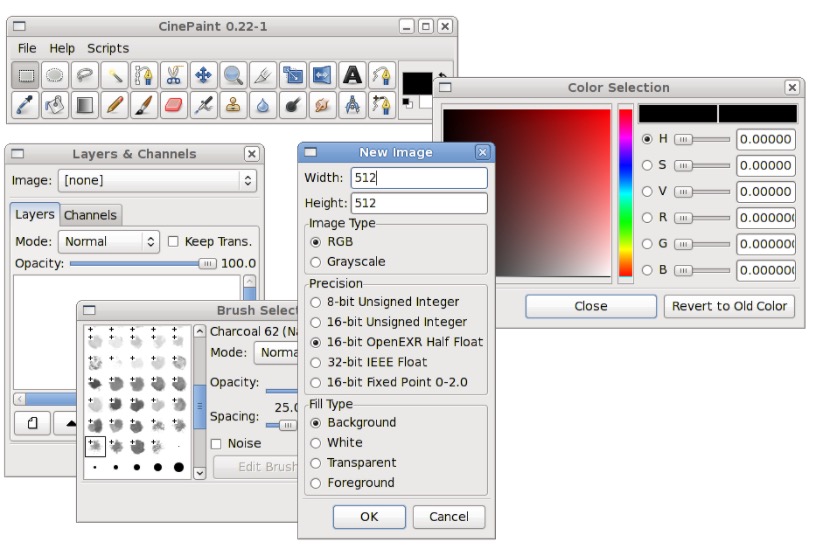 Started as a fork of the Gimp project, the main goal is to create a more professional graphical editing application aimed at the movie industry. The features of CinePaint are

Seashore (For Mac Only)

Seashore is an open source image editing tool for the Mac OS X Cocoa framework, stands somewhere between the old MacPaint and Photoshop. It has gradients and textures for both text and brush strokes and supports multiple layers and alpha channel editing. Based on GIMP, it uses the same file format. Seashore has enough options for the user with some advanced needs but it’s not adequate for professional applications.

Some of the commercial alternative software are

If you like these tools you may click on the share icons to spread the article with your friends. Do you know any other open source applications for image editing that has not listed above ? It will be great if you leave them in the comment.

Seashore, an open source image editing program for the MacOS’s Cocoa framework, stands somewhere between the old MacPaint and Photoshop. Its advantage lies in serving the basic image editing needs of the average computer user who doesn’t require a lot of bells and whistles. It has gradients and textures for both text and brush strokes and supports multiple layers and alpha channel editing. Based on GIMP, it uses the same file format. Seashore has enough options for the user with some advanced needs but it’s not adequate for professional applications.