Microsoft’s product version will be generally compared using their speed and the GUI. With their recent release of Windows 8 Developer Edition, its been clearly stated that their upgrade is purely focusing the speed there by avoiding the user a long wait in front of their machine during the boot, transfer, archiving and so on. A simple thing which is majorly concerned from both the developer side and the users sector is performance, which we are discussing so far. Windows 8 is mainly concerned for tablets and touch pad’s because of which most of the operation inside the system are touch sensitive.

Windows 8 targets tablet market specifically and specially iPad, is what we believe. May be we should wait till the Beta release to come out to see some more features added to it (may be). 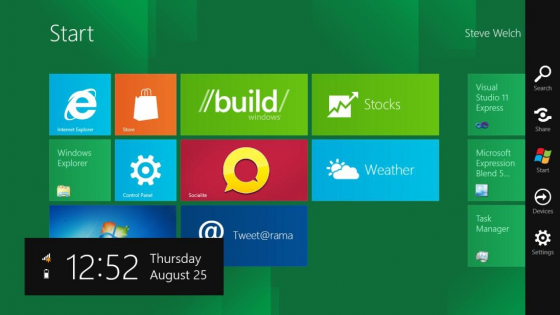 This review is full on based of preliminary testing done on the developer preview which further helps to improvise the content on comparing the recent and the successor of Windows operating system. So getting on to the basic comparison chart for these two ventures lets discuss a common thing one must be looking for in a performance upgrade. Say for instance booting speed, Archiving time both for compress and decompress, Encode a media, Browsing speed with respect to tabs count etc.,

We should surely consider the effort by Microsoft for reducing the boot time very less on their upcoming venture. This really makes sense when we go for a upgrade and getting what we do expect. This simple chart helps to conclude with some idea on performance meter for Windows 8 over that of Windows 7. Even though this is simply a developer edition by fetching some quality reviews Microsoft have planned to make their launch even more better and to ensure the next big return back into the place they left.