After #Bendgate for iPhone 6 now Apple has a new problem for its all new iPhone 6S phones called #Chipgate. Most of us know that Samsung is the Processor Chip supplier for Apple iPhone 6S and many of us don’t know there is one more supplier, Taiwan based TSMC. As a coincidence, chips supplied by samsung found to suck up more battery juice from the iPhone 6S and 6S Plus compared to the iPhone’s that comes with TSMC Processor chips.

This created big problem for Apple when users found out that their iPhone 6S has Samsung Chips, which is the reason for their poor battery performance.

If you haven’t found out what chip came with your iPhone, here we have a workaround to find it out. There is a way that you can approach apple for replacement if you have bought the phone in U.S as they provide 14 days return policy. Unfortunately, that dead line ends by tomorrow and even if you find out that your iPhone 6S is running samsung chip, it is again hard for you to test the new iPhone unless you take it out of the box.

Apple has responded to cultofmac saying that Chipgate is not tested with real world usage and it ships each iPhone’s with complete testing and there is no way that this could affect any normal user experience with battery life. 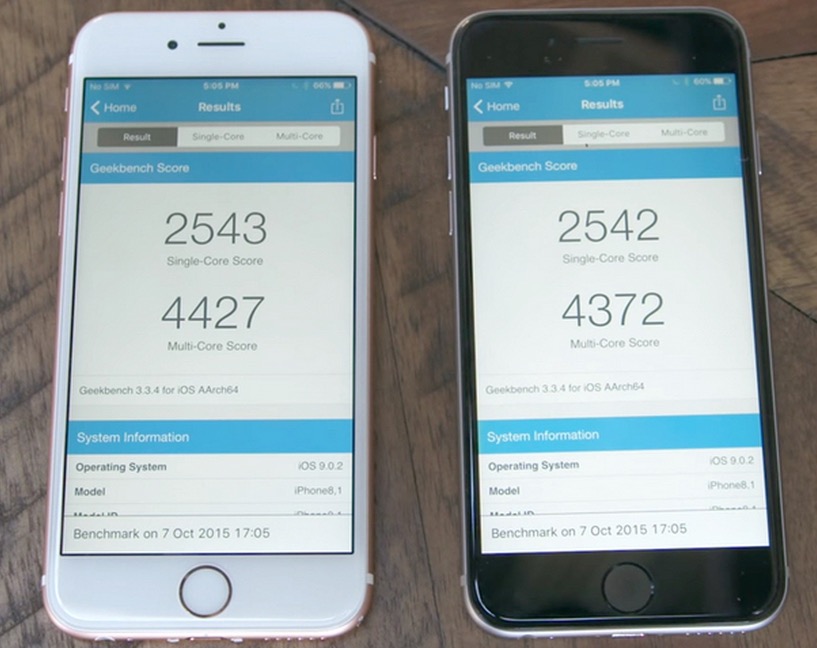 Austin Evans has published a video in his youtube channel showing the tests and performance of both iPhone 6S with Samsung and TSMC Processor chips. Without any further delay, lets find out who is your iPhone 6S Processor Chip.

With a simple test on your new iPhone 6S you will be able to easily find out, who is your Processor Chip manufacturer.

If you are looking for a free version to find out, then download lirum device info lite version to quickly get a glance of your iPhone 6S components. There is another free app called Battery memory system status monitor, which we haven’t tested but found to do the job of displaying hardware components information including processor manufacturer info. Download them only from App Store from the above link.

As we have seen in the video, there is a 6 to 11% difference in battery usage and TSMC chip seems to run cooler than the Samsung Processor chip. Which is a big deal for people who care about battery life on their iPhone. Apple has reduced the capacity of battery in both iPhone 6S and iPhone 6S Plus than its predecessor iPhone 6 and 6 Plus as they made it more stronger to fight back #Bendgate problem.

However, this #Chipgate that came into light, may hit the sales of iPhone in countries that Apple will launch their iPhone 6S this month and next month. It is important that Apple should address this issue with performance reports or even with unit replacements (for users reporting problems) to gain the trust for next years iPhone 7 release.

So, what do you think about iPhone 6S #Chipgate problem? Have you downloaded and installed our recommended app to know your iPhone 6S processor chip manufacturer? Feel free to comment below. Thanks for reading and have a wonderful day.