Google acquired VirusTotal Uploader in 2002 and continuously working on it to improve and detect malwares and viruses effectively. It was helping Microsoft windows users for long time and Google has released it now for Mac OS X users as well. VirusTotal Uploader is a web based antivirus scanner that scans suspicious files and urls that you specify at virustotal.com. There are many web antivirus software available, but many uses this because its from Google and it gets virus signature updates constantly. 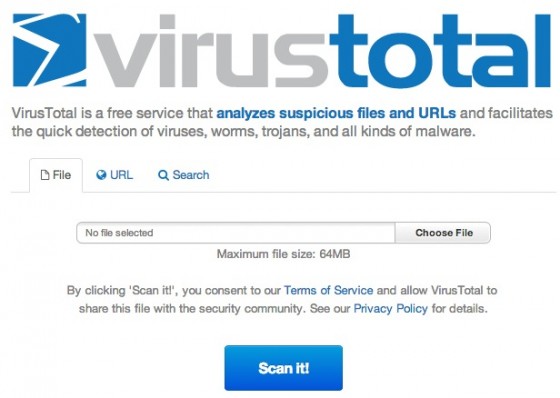 Virustotal analyzes any suspicious files and website links that you specify and detects most of the Viruses, Worms, Trojans and Malwares. Your operating system may be Linux, Mac OS X or Windows, hackers target browser software such as Chrome, Firefox and Internet Explorer most of the time to spread the malware and viruses via Web, Email and other sources.

If you have received an email from some unknown person or others and want to scan the attachment or the website url they suggested you to visit before executing or visiting the contents of it, consider using VirusTotal and Protect your computer from infections.

Apple Mac OS X is not an exception these days and hackers are widely targeting OS X users because of its increasing popularity. Business users and existing apple products users prefer Macbook and iMac for secure internet surfing, emails and for better productivity. Mac OS X is very stable and that makes it an attractive target for Hackers world wide to create malwares and viruses that affects users system performance and steal data. Google extended the support of its VirusTotal Uploader for Mac OS X, where users can upload the suspicious files in .dmg format etc., to scan by virustotal and get reports on it before executing it in their Mac computer.

This also gives a chance for VirusTotal back end team to analyze and do more research on the user uploaded files and improve the algorithm and virus signatures they have for Mac OS X users. This will make virustotal web based antivirus software more powerful in coming days.

Now virustotal has become one of the free os x antivirus software without any necessity to download and install in your macbook or imac. VirusTotal has a huge community of hackers who regularly investigate and research about upcoming malwares and other viruses. Addition of OS X feature will add more power to the community. As a Mac OS X users what do you think about this announcement from Google ? Share your views in the comment box below. Thanks for reading and have a wonderful day.