iH8swow hacker published a video today that demonstrates iPad 2 running iOS 8.1.1 with Untethered Jailbreak with Verbose and Custom Boot Logo. Apple had released iOS 8.1.1 globally yesterday to improve the speed and performance for older devices iPhone 4S and iPad 2. Pangu Jailbreak announced recently that the team is working on latest iOS 8.1.1 and soon we can expect untethered jailbreak release. Apple also mentioned credits to pangu jailbreak in its change log and fixing the same with iOS 8.1.1 release. 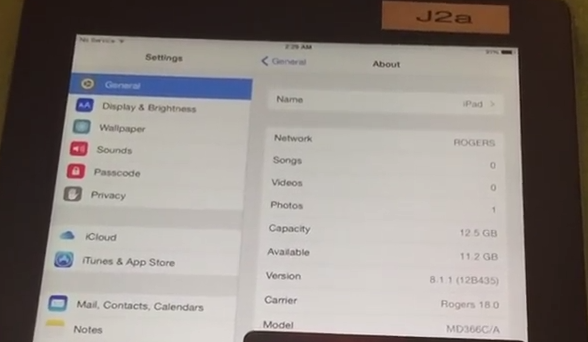 So if you wanted to stay with Jailbreak then you should wait for some date confirmation from pangu team before upgrading to iOS 8.1.1. Pangu jailbreak supports up to iOS 8.1 version. From the video uploaded by iH8snow we believe the jailbreak is successfully working on Apple iPad 2 and there is no untethered iOS 8.1.1 jailbreak successful for lightning connector enabled devices.

The hacker also credited @xanderkitteh for helping him with the jailbreak to make it work on iPad.

Though the hacker dont promise any date or approximate time about iOS 8.1.1 Untethered Jailbreak release, he warns users to not update if they are running iOS 8.1 with successfully jailbroken devices.

Jailbreaking your iPhone, iPad allows you to do more customization by downloading third party apps. But remember, it also increases the security risks of your device and data. It puts your privacy in big risk as third party apps many times send data without your permission to app developers servers. Recently, Security Research firm FireEye found a new flaw in iOS devices called “Masque Attack” triggered by third party apps and it affects Jailbroken iOS devices mainly.

So make sure you aware about the risks involved in jailbreaking your iPhone, iPad before proceeding. Thanks for reading and you may now share this post with friends and followers across Twitter, Facebook and Google+. Have a wonderful day!