SIRI says Kill the Humans, must be a terrific imagination by RoosterTeeth. SIRI: The iPhone Movie Trailer by Rooster Teeth is pretty Hilarious and kind of Freaky too 🙂 The Horror movie theme doesnt suite well to SIRI anyhow the team has proved its excellence with great actors who performed very well with this video trailer, that shows what if SIRI turned against humans ?

There are few crazy parts where the SIRI moves on its own to kill the people and the color change to Red reminds me some hollywood movies, where to represent the evil we usually use scary big red eyes in red color 🙂

What SIRI Replies for “Do you Kill Humans ?“ 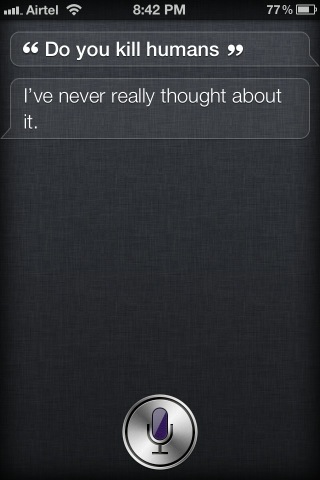 SIRI Responds that it never really thought about it. haha so may be in future we can expect something crazy to happen :P. Now look at your iPhone 4S and ask SIRI “Are you going to kill me ?” 😛