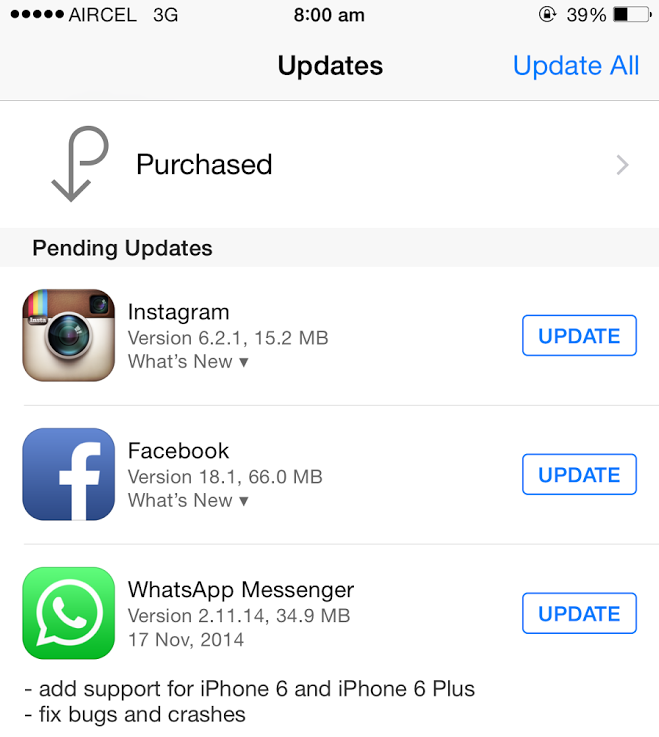 So Whats new with the latest WhatsApp Messenger update? App Developers started to work on updating their Apps from the moment iOS beta hits developer portal. Being a very popular messenger app for iPhone, WhatsApp took very long time to update their app to make it compatible for iOS 8, iPhone 6 and iPhone 6 Plus as well.

When Facebook Messenger got updated regularly along with Facebook App, WhatsApp received just one update to make it compatible for iOS 8 and that too broken after apple released iOS 8.1 last month. Frequent Crashes, Bugs, Keyboard issues and most importantly screen stretched on iPhone 6 and iPhone 6 Plus gave worst experience to users worldwide. I personally believe that after facebook acquisition, WhatsApp may be pushed back to bring Facebook Messenger forward with all feature additions and updates. Facebook Messenger users have increased recently to half billion in numbers and no doubt facebook team loves about that.

WhatsApp messenger alternative apps started to go on steroids in new user registrations, downloads and app usage after users are tired of waiting for long time.

Another important release happened today is iOS 8.1.1 and we got the WhatsApp update on same day. iOS 8.1.1 focuses mainly on improving older devices such as iPhone 4S and iPad 2 in terms of Speed, fixing Apps crashes and lot of bug fixes across the platform.

Have you updated WhatsApp Messenger on your new iPhone 6 ? Let us know your comments below. Thanks for reading and have a wonderful day.