Home Apple Apple iOS 6 vs. Android vs. Windows Phone: Which One Will Rule Communication Class ?

There have been an evolution taken place in the mobile market across the world since last few years. There is not a probably a single soul left in the world who does not use mobile phone these days. Though everybody does not use Smartphone but smart phones are the latest addition to the world of mobile and technology that has changed our lives in many ways. 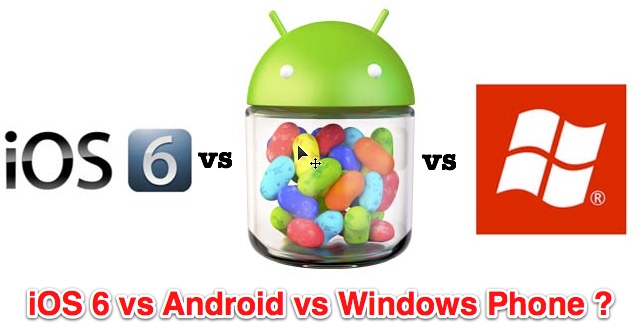 The entire mobile industry has become the racing ground for Apple, Microsoft and Google with their iOS6, Windows Phone and Android operating systems respectively. But with the volatile nature in the market it is really very tough to say which one of these is the best.

Apple has tried its hand in making successive repetition  of its iOS platform backwards which is attuned with the earlier hardware release. This will spare the users from month long waiting to get an update. This is perhaps one of the best things apple has done for its user and this has made it distinct from the other two operating systems.

But iOs is comparatively less accessible as it is only available in the high quality, expensive smart phones developed by Apple unlike Android which is tied to a number of mobile phone companies and is available in a number of smartphones. But this could not stop iOS from becoming the most popular mobile phone OS. In spite of being costly a number of people buys iPhones each and every day across the world.

Windows phone introduced by Microsoft stands somewhere between iOs6 and Android as it is available in a number of handsets produced by different mobile phone companies but it is strictly controlled by Microsoft in terms of assuring the quality.

If you use different handsets running on the Windows platform you will not find much difference as the functionalities and the interface available in all the smart phones are quite similar to each other. Nokia is one of the most popular brand that promotes Windows phones largely. It has recently launched it Lumia collection that runs on windows operating system. But there are a number of handsets as well that has recently dropped Windows OS due to slag performance issue.

More the 50 percent of total smart being sold on the market every run on Android operating system. It is one of the most popular mobile phone operating systems  introduced by Google that has the capability to give Apple a tough competition. According to Google the Android activation number have topped with the lucrative figure of 900000 and is still growing. The success of this operating systems is largely depends on its availability. Android operating system is available in most of all smartphones such as Sony, LG, Motorola, HTC and Samsung available in the market these days. The most important feature that make this OS most popular is unlike iOS it is not available only for the expensive handsets. It also tampers the hardware to make it available on the cheaper handsets as well.

The smartphone market has the ability to support more than one operating systems at a time keeping in mind the demands of the users who want different stuffs from different handsets. If we take a look at the market we can assume that among these three giant companies Apple and Google will remain in the dominant position but the fate of Microsoft is still uncertain.

About the Author – The above article is written and edited by Roxanne Peterson, who is a freelance writer for various blogs and communities related to technology. In her free time she writes articles related to Windows 8 info and Microsoft Office 2010 or anything that is related to them.