Shocking news for many iPhone fans who are about to buy and already bought iPhone 7 with 32GB Storage model. Apple have never mentioned this on stage during launch or made it clear to the buyers anywhere about the performance slow down on new iPhone 7 models. Looks like, 32GB iPhone 7 has Slower Read, Write Speed than 128GB and 256GB iPhone 7 models.

It is good to know that Apple ditched 16GB Storage model choice with iPhone 7 and made it 32GB as the starting storage option.

Unfortunately, that happy face turned to sad face after knowing that iPhone 7 32GB model slower than the 128GB and 256GB models in Disk Read and Write Speeds.

The popular Bendgate inventor 😉 Youtube Blogger at Unbox Therapy published a video in his youtube channel showing the Disk Speed difference in both iPhone 7 with 32GB model and 256GB model. While performing the Benchmark tests, it clearly shows that the Write Speed of iPhone 7 with 32GB Storage was 42 MB/s and 256GB model shows 341 MB/s which is 8 times faster than the base model. 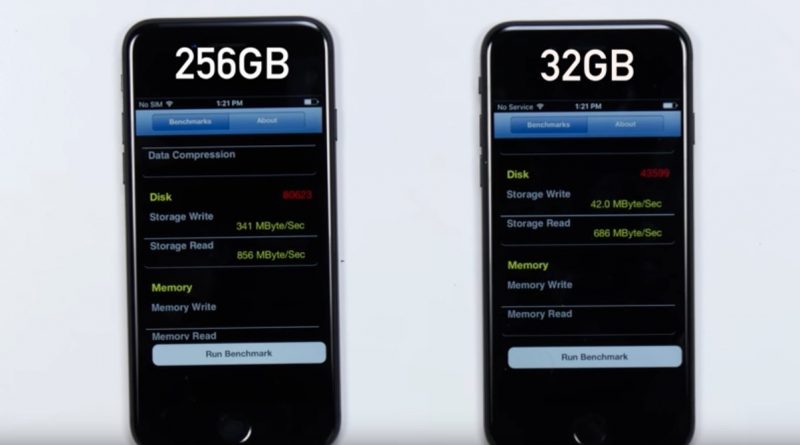 About Read speed, 32GB model shows 686 MB/s and 256GB model shows 856 MB/s. While transferring a video file it the time difference was 2:34 mins on 256GB model and 3:38 mins on 32GB model. That’s almost 40 seconds difference. As he mentioned in the video, there is no way that Apple store employee going to tell you about this Disk Read and Write Speed difference.

You will go for the base model of iPhone 7 mainly because of its pricing and double the storage amount compared to last years iPhone 6S model.

Which iPhone 7 Model to Purchase?

Apple iPhone 7 has excellent camera that can replace your semi SLR camera and people who use iPhone love to take photos on their phone. When you go for 128GB model with hundred dollars difference, you can shoot videos and photos without worrying about storage limits. If you are a person like me, who love playing games on iPhone, then the higher storage models will let you download games with amazing graphics that utilize GPU built into the iPhone 7 and iPhone 7 Plus models.

For better performance and resale value, i would suggest you to consider getting 128GB or 256GB models depending on your requirement. If you take lot of photos, videos and download apps from app store, then go for the 256 GB model.

So, what do you think about this iPhone 7 Disk Speed Test? Have your decided which iPhone 7 model you are going to get? Feel free to share this post with your friends and followers at Twitter, Facebook and Google+. Have a wonderful day.