After so many concerns about Facebook Privacy issues across the web, Matthew Milan and Joseph Dee are mobilizing a formal facebook revolt with Quit Facebook Day Campaign. Mashable has launched a voting in its article to get the data to know how many users are ready to quit facebook on scheduled Quit Facebook Day. The poll shows 50% equivalent results.

For us it comes down to two things: fair choices and best intentions. In our view, Facebook doesn’t do a good job in either department. Facebook gives you choices about how to manage your data, but they aren’t fair choices, and while the onus is on the individual to manage these choices, Facebook makes it damn difficult for the average user to understand or manage this. We also don’t think Facebook has much respect for you or your data, especially in the context of the future.

For a lot of people, quitting Facebook revolves around privacy. This is a legitimate concern, but we also think the privacy issue is just the symptom of a larger set of issues. The cumulative effects of what Facebook does now will not play out well in the future, and we care deeply about the future of the web as an open, safe and human place. We just can’t see Facebook’s current direction being aligned with any positive future for the web, so we’re leaving. 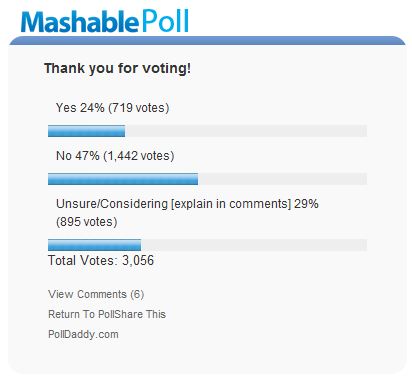 In Quit-facebook-day website you may enter your name to register that you are interested in committing account deactivation on that day. There is no reaction from facebook till now. All this happens after facebook becoming too commercial. Its almost appears like a war between linux and windows 🙂 but here the social media war is acting bit different to make the facebook more powerful and to grow bigger 🙂 silently.

Do leave your views about quitting facebook or not to, in comments.