Home How to HOW TO: Identify and Remove Useless Apps from Android Mobile ?

Though higher end Android phones like Samsung Galaxy S3, Galaxy Nexus’s configuration is similar to the iPhone there is a big difference in the performance of both the mobile phones. Android company Ads say the performance is more than the iPhone but as a user of both the mobile phones, I don’t see the iPhone’s efficiency and performance in any higher end Android mobiles. Also one of the main disadvantage in the Android platform is, most of the phones won’t support the latest OS upgrades. Even some of the higher end models will not have any clue whether it will support the latest OS versions or not. Now Android is in version 4.2 (Jelly Bean) but still more than 70 percent of Android mobiles were running Ginger Bread (2.3). Managing the Apps on Android is very important and you should check and remove useless apps to keep the performance good. 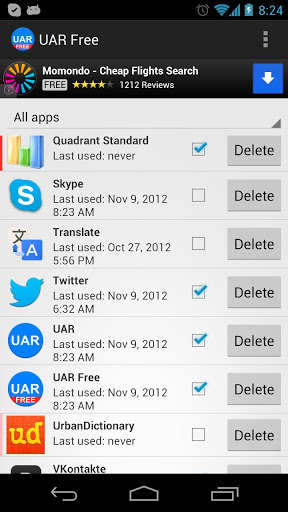 It is because, all the installed apps will use your phone’s internal memory while executing.  So it is important to remove unused apps when you install new apps on your Android phone. It is quite tough to sit and search for the unused apps every time. So today we are going to discuss about an application called “Useless Apps Remover“, which helps you to automatically identify the useless apps on your phone and remove it. Let’s have a look at the features and functions of the app.

HOW TO Remove Useless Apps From Android ?

Useless Apps Remover is one of the best apps for Android which will let you know about the unused apps on your Android phone. There is both free and paid versions are available in Google play. You can first download the trial version, if you like the app you can go for the premium one. Android Useless Apps Remover (UAR) is a very simple and light weighted application. Understanding and using the app is really simple. Once you install and open the app, in the home screen you will see the list of apps you have installed in your Android phone. All the apps will be arranged based on its last usage. So the most unused app will be available at the top of the screen.

You can see the details of that unused app from UAR. Just tap on the application name, it will show you the details of size and the memory occupied by that particular app on your mobile phone. So it will help you to decide which one to remove from your phone. You can delete the unused apps right from the UAR application. Just select the apps you want to delete and tap the delete button to remove those apps from your mobile phone. If the app you are going to remove is a premium one, you don’t need to worry at all because it is just temporarily removed from your phone. You can download that app from Google play at any time.

Another important feature in UAR is, you can turn on notifications about the unused apps on your Android phone. Once in a day or once in a week you will get notified about the unused apps on your mobile phone. So there will not be any performance issues because of the apps. UAR premium version is Ad free, if you don’t care about Ads then you can use the free version itself. There is no difference in features and functions. Thanks for reading and do share your experience with us in the comment box.