Home Apple How iPad has Revolutionized the Tablet Market ?

When the WWDC conference was announced on March 2010, many rumors has come about the new device. Everybody thought it will be going to a new netbook from Apple but Steve came with a Tablet device called iPad. Everyone has seen that as a bigger iPod Touch and thought nothing going to be new. As of now really it’s a bigger iPod Touch but Steve has visualized the importance of the bigger screen before its launch. People felt a huge difference between the same app when it is used in iPad. Steve hasn’t separated the applications for iPad, the apps in iPhone App Store were made compatible with iPad. This made people feel the difference. 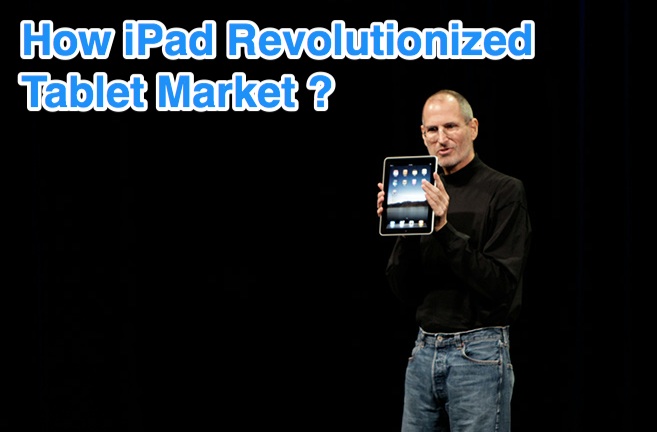 When First Generation iPad was introduced, many people thought it would be useless and it lags many features. The first iPad has come without front and rear camera. Even many of them have criticized it, Apple has sold 300,000 units on the first day of the launch and it has reached 14.8 million units by the end of 2010. Apple iPad has acquired the 75% of tablet sales for the year 2010.

Then people started looking iPad in Steve’s perspective and realized this is how he has visualized the Apple iPad. Let’s discuss more about the features and the achievements made by iPad in the tablet market.

Features Made iPad an Outstanding Tablet

The first generation iPad came in two types, a WiFi only type and WiFi + 3G enabled type. The memory of the iPad was 16GB and 32GB for both the types. People have thought what can we do this less amount of memory but when they started using it they have realized it’s more than enough for a tablet. The flash memory is the biggest strength of iPad, it has given faster access towards the data and applications in it. The first iPad without camera has become a very great drawback. Many of them have criticized that how come Apple has introduced 3G in iPad without front camera. So Apple started working on the next iPad much faster.

By March 2011, the next WWDC conference was announced. Everyone knows surely it’s going to be iPad 2. The features were very secret and everyone was eagerly waiting for it. As everyone expected Steve unveiled iPad 2 with front and rear camera. New iPad 2 is 33% thinner and 15% lighter than the first generation iPad. Sadly, that was the last conference for Steve and iPad 2 is the last device introduced by him. After that Steve was hospitalized and he resigned his job on August 24, 2011. By October 5, 2011 Steve passed away. But the iPad he introduced has become one of the most successful tablet in the world. 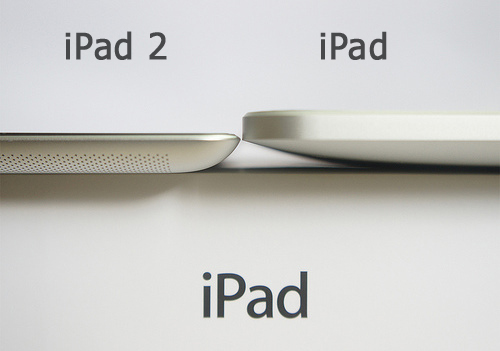 It supported Facetime and 3-Dimensional Gyroscope features. iPad 2 was introduced in 16, 32 and 64GB models with only WiFi and WiFi + 3G support. iPad 2 was upgraded from A4 processors to A5, one of the fastest tablet processors on the planet. iPad 2’s battery usage duration is 10 hours and the stand by time is 30 days. Even today no tablet in the planet has this much battery usage and standby time. One of the best accessory introduced with iPad 2 was Smart Cover for iPad. It acts to protect iPad as well as wake up the iPad whenever you open it also it acts as a stand for your iPad. When iPad 2 was introduced many tablets has come into the market. Samsung Galaxy Tab, Motorola Xoom, Blackberry Playbook, etc. Were introduced by that time. But iPad has acquired 82% of the tablet sales for the year 2011.

After Steve’s resignation, Tim Cook took charge for his position. He was filled with responsibilities and understood the eagerness of the crowd before him when he introduced iPhone 4s. So he started working much more responsible for the forthcoming products. The next WWDC conference was announced on March 7, 2012. Tim Cook unveiled iPad 3 as revolutionized 3rd generation iPad. It was upgraded to the extremely fast dual core A5x processor and quad-core graphical function. iPhone’s retina display is introduced in iPad with 2048 by 1536 pixels of resolution. It is over 50% more than a high definition TV.

Next the stunning feature was isite Camera, it is a 5MP camera which can record video in 1080p resolution. Also iPad 3 is the first tablet in the world introduced with 4G. Like iPad 2, 3rd generation iPad came with 16, 32 and 64GB models with WiFi only and WiFi + 4G Cellular support. Within the two days of iPad 3 launch, Apple has sold 3 million units. As of March 31, 2012 Apple has sold 15 million iPad 3 all over the world. Among 106.4 million tablets sold around the world, Apple iPad holds 62.5 percent. Still Apple iPad dominates the tablet market.

iPad vs Other Tablets

After Apple has introduced its first iPad, many companies started developing their own tablet devices. By that time Android has become a very popular mobile operating system. HTC was the first company to introduce android phones. Then Samsung and Motorola started developing android phones and Samsung has become a great manufacturer in developing android mobiles. Samsung introduced its first tablet in 2nd Sep 2010. Just a copy of iPad with some slight changes. The configuration and the device quality was very less as compared to the iPad. Then many companies have introduced their tablets. Motorola introduced “Xoom”, Blackberry came with “PlayBook”, Microsoft has recently launched “Surface” and much more. 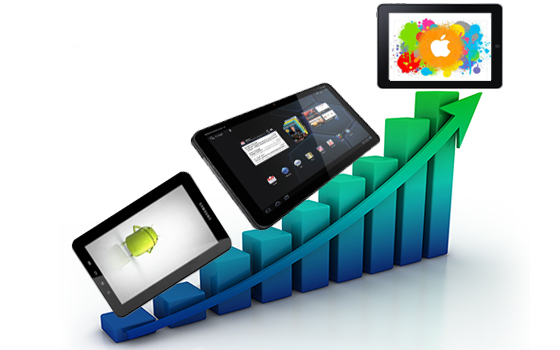 Even though they came with some slight changes from the concept and the design of iPad. They couldn’t touch the quality and performance of iPad. That too after the launch of iPad 2, the crowd was completely moved to iPad. Many people who had a laptop and a Smartphone with their preferred iPad for business as well as entertainment. As I said earlier, applications are the biggest strength of iPad. It will transform it’s purpose based on the user’s need. People found it the applications were very helpful and simplified their works. The rest of the tablets failed to do this.

The strength of the inbuilt applications haven’t that powerful and the tablets have been developed only depending on the third party applications.  That has made those tablets failed to fulfill the user’s needs.

As I said earlier iPad is not just a tablet it transforms its usage according to the requirements of a user. The applications available for iPad makes it even more unique. The accessories available for iPad makes it more comfortable to carry wherever you go. The role of iPad in Education is tremendous. It is a best device for both mentors and students. iPad is rated as the best tablet for e-book reading. There are plenty of applications were available for creative users like designers and webmasters. It is a perfect gadget for movies and games. The stunning Graphics and Retina Display will give feast to your eyes. By using remote desktop apps literally you can carry your desktop with you. It helps you to do all the actions on your remote computer right from your iPad.

Wherever you travel and whatever the business you do iPad is a must have device in your gadget list. It doesn’t mean I support only for iPad and the others are worse. I have used most of the existing tablets and found iPad is the best out of it. So this is how iPad made its debut and become a revolutionary device in the tablet market.

Thanks for reading and you may now share this post with your friends to let them also know how iPad has revolutionized tablet market and continuously performing well to be the best tablet around the world.